Hulk was the last throw of the dice to get an offspring from Sansa, and what better way than a line breed mating to her grand nephew Ike. I have always liked “Ike” and the way he developed. I have used his great grandfather before “colt”, and got lovely quality puppies  including Kuda Butch and Sansa off course. Hulk was a singleton puppy, and from day one he showed he was going to be different. Very independent and walking on all fours on day 2 still blind and deaf. Hand raised for most of the time he grew quickly so, with his mother starting to educate him he enjoyed being with older dogs from the start. With no effort he just kept showing what a tough and independent puppy he was and spent more time with his uncle Bondi and mother during the day while I was at work . He slowly learned how to walk properly on lead and after a short while his show training started. My paperwork wasn’t complete so my first show wasn’t going to be till after the new year period.

His first show also happened to be indoors and we new this would be another challenge for him, but hulk took to it like a professional. Nothing seems to bother this boy and he showed his head off for Tayla on their debut together.

His next outing was at a show held under FCI judging and again he went like a trooper, this time being shown by Kim Azzopardi who owns Running Jacks / jack Russell terriers. He and Kim looked brilliant and the judge awarded him baby puppy in group, with some lovely remarks as well.

I have no doubt that if hulk keeps going like I expect he will, he is going to take over from his uncle as one of the top ridgebacks to beat in this country.

16/04/19 The RRCV championship show Hulk goes best baby puppy in show. This was Hulk’s third outing and this time handled by Tayla Wright. He showed beautifully and once again showed what a little professional he is becoming.
15/03/2020 Hulk got his tile He will now be known as Aus Ch Kinshasa Lonesome Warrior. I have had Hulk Xryad for hips & elbows and has excellent results Hips 2:2 = 4 Elbows 0 : 0 = 0 score. Waiting on his DNA results.

Brown (GLNT331stop ) Does not carry Brown or Chocolate

Brown (345delpro) Deletion does not carry brown or chocolate deletion 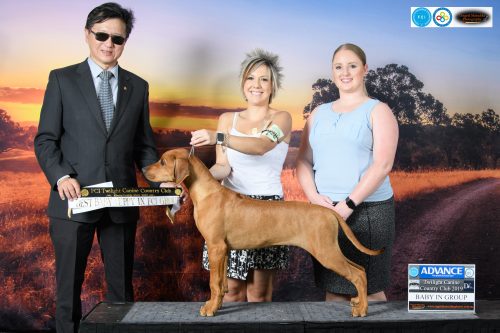 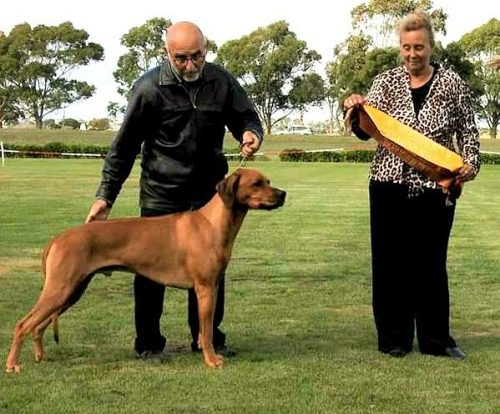