↓
Memories
This page is dedicated to my Ridgebacks who are no longer with us and were the old hunting crew. They were  a wonderful team of dogs that did everything I asked of them and more. They were my companions on many hunting trips and it gave me many many hours of pleasure watching them hunting in the bush. Most of them were show dogs as well but they excelled at hunting in the field and loved  nothing more than being curled up by the camp fire at nights with my friends that accompanied me on those trips. Their skills in tracking game was unsurpassed and their enduring stamina was amazing. There were times when I thought that the hunt would achieve no results after hours of walking, then suddenly one of them would catch a scent and they would all be off in pursuit. Some of our most memorable hunts in the early 80’s went for half a day or more. After the hunt the dogs looked forward to a swim in the river, a good feed and a good place to sleep beside the camp fire. Amongst those dogs was my first Ridgeback Shaitani, he was a tenacious hunter and although he was minimum height he had amazing strength and endurance. He lived till over 13 years of age and it was a very sad day when we had to say goodbye to him. Another of the hunting crew was my Emm (Ujamma Ladys Way). Emm was a dominant bitch around other dogs, very affectionate with people and a fearless hunter. She would disappear without a sound especially if her favorite hunting partner Diesel was around, and hunt Kangaroos. I worried she would get seriously hurt by a roo so I made her a protective vest which she wore successfully. Emm was shown when young but didn’t really like the show ring, but she loved and lived to hunt. Emm lived till 12 years of age and it tore at our heart when we had to make the decision that all dog lovers hate. Two others that were in the hunting crew were Thamani’s Almasi (impUK) known to his friends as ‘Al’ and Ch Rijstone Rising Sun (our foundation bitch) ‘Sonnie’ they can be found in the boys and girls section of this website. Both of these dogs loved to hunt also, they enjoyed each others company during these times and in the lazy times at home. After two knee reconstructions my hunting days are over, I have great memories from those times. 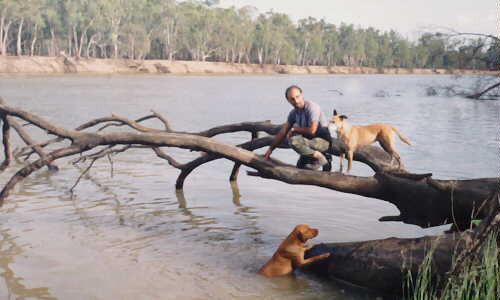